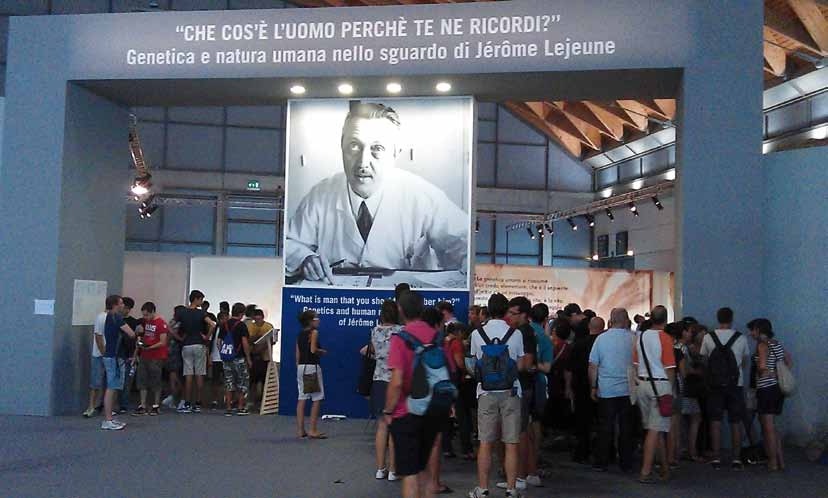 A few years after the conferences that Jérôme Lejeune gave in Rimini during the famous congress, a large exposition was dedicated to him in the 2012 congress, from the 19th to the 25th of August. 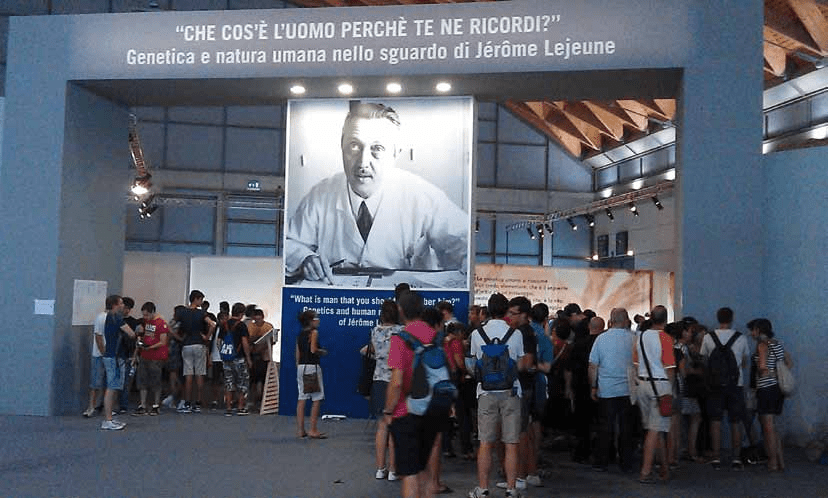 Every summer since 1980, the Communion and Liberation movement, prepares a week’s gathering to encourage friendship between nations in Rimini in Italy. The event is unique and sponsored by many private and institutional partners. Even though the vast majority are Christian, every year, the meeting in Rimini brings together over 800 000 people from all horizons.

Focused on everything concerning the city’s life (culture, shows, economics, society…), the meeting is an opportunity to go to various expositions, shows, concerts, conferences… It is also a time when it becomes possible to meet well-known people from politics, companies, universities or even artists, men or women of letters and scientists from all over the world.
The 2012 edition’s theme being « man is by nature relation with infinity”, those in charge of the congress wanted to make known the way Jérôme Lejeune, as a Christian scientist, saw human nature.

An exposition of about 1000 m2 was therefore dedicated to this. It was organized in collaboration with Euresis, an association devoted to the promotion of scientific culture, and the Jérôme Lejeune Foundation.

Carrying the title « what is Man in the eyes of Jérôme Lejeune”, the exposition presented the life and work of the professor, presenting how he evolved from medicine to therapeutics and from research to defending life.

The exposition presented, in particular thanks to his diary, the convergence there was in him between faith and science, science and conscience. Among the 40 guides trained to show people around the exposition and the people they guided, many expressed their joy of having discovered or rediscovered Jérôme Lejeune and reflected with him on what a human being really is. It seems they became conscious of the ethical questions brought up by science and realized how the current ways of thinking were born and developed. Clearly moved by Jérôme Lejeune’s devotion for the respect of human life, the visitors were glad to hear, at the end of the visit, that the Jérôme Lejeune Foundation carries on with his work today.

In connection with the exposition, Madam Lejeune, Jean-Marie Le méné and Carlo Soave (one of the exhibition’s curators), all gave talks at a conference which was organized during the congress on the 2nd of August, in the afternoon.

The auditory was very moved to meet Madam Lejeune, and gave her a round of applause and then listened attentively to the president of the Foundation. Starting his speech by picking up on recent events- the imprisonment of a young Pakistani women who is said to be living with Down Syndrome, the marketing, in several countries of a new prenatal screening test and the ongoing Kruzmane case against Latvia at the ECHR (2)- - Jean Marie Le Méné commented on the fact that “Down Syndrome is an icon of weakness, a scapegoat symbol and a witness of civilization”. Speaking about techno-sciences and certain “medical” practices, he underlined that Jérôme Lejeune had anticipated the risks of ethical excesses in the 70s. And, indeed, as he already sensed then, “there is now a confusion between good and evil and life in society is being altered.”

That is why « by accepting the opening of the cause of Jérôme Lejeune’s beatification, the Church is giving us a model of a Christian layman who always used science for man’s true good, and it has become a necessary model today (…).”
As a conclusion, he added: “It is an invitation to imitate the personality and unified life of Jérôme Lejeune but also an invitation to join the action of the Foundation that carries his name”